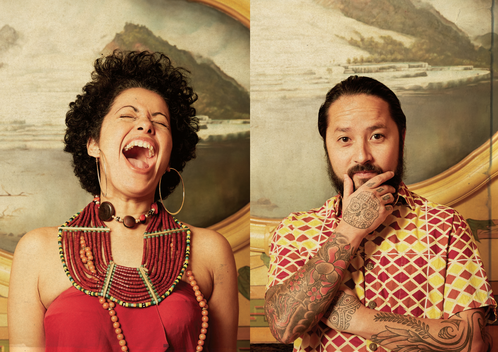 SOUNDCLOUD | INSTAGRAM
Latinaotearoa came from the concept of blending local flavours with the colourful cultures of South America. Brazilian born Auckland DJ Bobby Brazuka and Venezuelan singer Jennifer Zea created a unique live performance with Bobby’s Latin influenced soul-funk and hip hop selections layered with Jennifer’s ravishing vocals. The local response was so positive the band decided to test international waters by taking their sound to Australia and Europe. It was soon apparent that this was not just a recipe for kiwi appetites – bustling crowds meant promoters were quick to discuss future tours. This natural progression and a desire to develop musically led to what felt like an inevitable next step; new and original productions to season an already flavoursome set.

Eight years, three albums and countless tours later, Latinaotearoa continues to go from strength to strength. Debut album Sonido de Latinaotearoa was nominated for Best Roots Album at the Vodafone New Zealand Music Awards in 2013, creating deserved exposure for the band. It provided momentum for their follow-up album, Latinaotearoa in Latinoamerica, which was recorded in 2014 in the colourful surrounds of Brazil, enabling the group to delve into their Latin roots for inspiration. The second album was also nominated for New New Zealand Music Awards in 2015. And third album, Influencis in Collabis was an amazing multi-cultural mix of sounds and genres created in collaboration with some of New Zealand & Brazil’s best musicians.

Regulars to the Splore and Womad Festivals, Latinaotearoa is bringing their show to this Summer in four piece band format with Brazilian dancers and lighting shows. This wicked band have become a recognised name in New Zealand and are at the heart of the local Latin community. From South America to Aotearoa and all across the globe, this fiery outfit delivers an energetic and exciting set for anyone lucky enough to see them perform.They've achieved so much in such a short time, but with dedication and passion towards their music and at the core of everything they do, the world is guaranteed to see so much more.