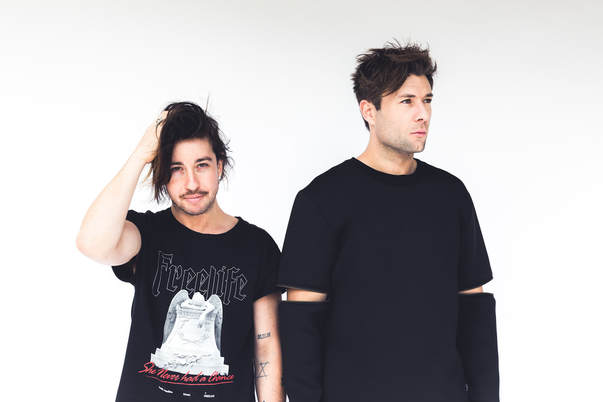 SOUNDCLOUD |INSTAGRAM
Chores are an award-winning duo whose feel-good, dance-floor tunes have established them as one of the most exciting electronic acts south of the equator.
Their tracks receive widespread play on radio both in New Zealand and Australia, and have helped earn Chores the award for ‘Best Electronic Act’ at the 2018 Aotearoa Music Awards. The pair also won  ‘Breakthrough Artist of the Year’  at the 2017 the George FM awards and in 2018 at the same awards, were nominated for ‘International Achievement Award’.

Chores have spent years honing their craft, DJing and performing as a full band at New Zealand festivals Rhythm and Vines, Northern Bass, Bay Dreams and Deep Hard N Funky, as well as supporting dance music luminaires Basement Jaxx, What So Not, Duke Dumont, Peking Duk, The Chainsmokers and A-Trak. In early 2019, Chores were handpicked to put their spin on ‘Weapon Of Choice’ by the legendary Fatboy Slim for an EP of remixes.

In early 2021 Chores released their debut EP, WORKING FROM HOME, which features some of Australasia’s best up and coming and underground vocalists including DOOLIE, Akacia, LALKA and Ariela Jacobs. The EP was recorded during lockdown in Melbourne 2020, where Chores (Sam Saunders and Thom Simmons) have been based for the last few years.

2022 is already off to an electric start with Chores releasing two dance floor singles, ‘Indigo’ feat. Rei and ‘My Love’ feat. Indyah, with another EP planned for release later in the year.