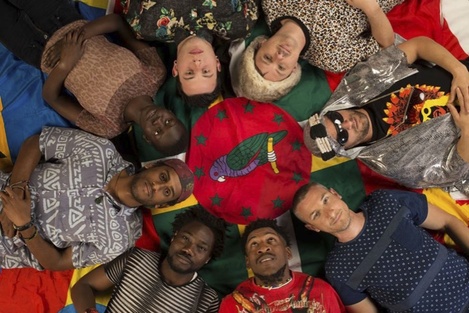 soundcloud.com/weird-together
Helmed by Tokyo based New Zealand DJ and Radio / TV host Nick Dwyer and legendary Auckland based English music producer and DJ Dick "Magik J" Johnson, Weird Together is one of the most globally minded dance music projects to emerge from the South Pacific in recent times.

What started as a studio project is a now fully formed 12 piece band with members hailing from all corners of the globe with Karima Madut representing South Sudan, Percussionist Mavs Adegbite representing Nigeria, Alessano Schuster on steel pan being a super rare mix of Trini - Samoan, and Jinitero MC being far far away from his homeland of Cuba. They are joined up the mysterious Gaza Tripp on Guitar, Izak Chads also on Pan and the mighty Horns of Tekapo bringing the Brass blast.


Together they have been storming the stage at some of the biggest festivals around New Zealand and Australia and now have their eyes firmly set on bringing this unique mix of global sounds to the world stage. With their debut EP dropping at the beginning of 2015 on respected UK purveyor of incredible 'sounds of the world' Soundway Records and a release on The Jillionaire's Feel Up Records things are certainly heading in that direction.
DISCOGRAPHY
Bounce To The Beat (Ft Edem & Kemenya), Feel Up Records, June 2015
No Compromise EP, Soundway Records, Jan 2015
Drop The Brass, Independant, July 2014
Chale, Independant, June 2012
The 'ave, Independant, April 2012
PRESS
Jillionaire, LargeUp.com, July 2015
Grant Smithies, Sunday Star Times, Feb 2015
The Wireless, Feb 2014