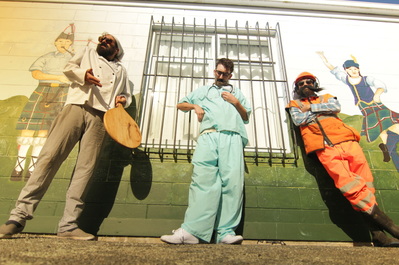 The Nudge are a fresh form of innovative blues and roots. "Keen for a Nudge?"

The Nudge have been forming their genre crossing sound since 2010. Born initially from Ryan Prebble wishing to expand what was originally a solo project.
Elements of blues were naturally there, however with the addition of Coyle and Whakamoe, The Nudge has come to find their sound far more psychedelic and hypnotic. What establishes these guys as unique, is there ability to full the sonic's of the music, both layered and texturally, to be a crucial part of their song writing.

Often tribal in rhythm, the element of a party and dance vibe is never far away from the heart of the songs. This heart of the Nudge is best described in their debut album “Big Nudge Pie” released in 2011.  The Nudge, is increasingly exploring the cinematic & performance side of its music, taking audiences on a journey they are not likely to forget. Through their collaboration with composer John Psathas in 2014/2015  there is a strong element of orchestration and exploration of arrangements.