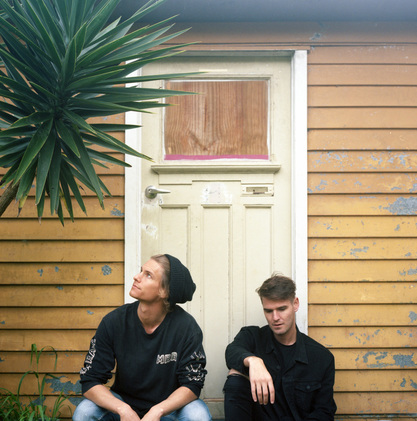 SOUNDCLOUD | INSTAGRAM
It was the desire for change that encouraged Scott Tindale and Greg Stack (Stack & Piece) to start throwing, then playing, some of the biggest parties in New Zealand. Growing up in the small farming town of Hamilton the good friends saw an opportunity to create something exciting and new for the region.
​Starting with small, hundred person parties and playing electro house and dubstep, the duo quickly gained a reputation as party starters. The events they threw quickly expanded and in 2010 they launched the inner-city Soundscape festival which attracted just over 1000 people to the center of the 150,000 person town.

As the popularity of the parties increased so did their reputation as DJs and they started playing around the rest of the country and Greg took up a drive-show host residency of local radio station Fevah FM. He was then handpicked to play one of the only local support slots when Deadmau5 and Skrillex played at one of New Zealand’s biggest indoor arenas, Vector Arena, in Auckland in 2011. Following that show, Stack & Piece started to play a variety of genres moving between house, hip-hop, rock, trap, twerk, drum n bass and more – cementing themselves as ‘must haves’ for any line-up. They were quickly picked up to play almost every major festival in New Zealand including Rhythm and Vines, Our:House, Deep, Hard N Funky and playing on the bills of a huge number of international acts including; Calvin Harris, Major Lazer, David Guetta, Skrillex (again), Steve Aoki, Zedd, Clockwork, Destructo, Borgore, Datsik, Baauer, Afrojack, Grandmaster Flash, Caspa, Avicii, Crookers, Peking Duk, DJ Snake, What So Not, Wilkinson and Alison Wonderland.

In 2012 the annual Soundscape festival expanded yet again, bringing in even more people and in 2013 it turned into a full street party, run by Stack & Piece and working with the local government and corporate sponsors – it featured eight unique zones and drew in over 5,500 festival-goers. It was subsequently voted the second best event in Hamilton in the Waikato Times newspaper (readership 77,00) – a phenomenal achievement for an event with a target market far younger than the average newspaper readership. The win, growth and reputation of the events showed the reach of the duos network with numerous tour managers and record labels working to get their acts to a city once renown for having a dull nightlife.

Bouyed by their success as DJs and Promoters, Stack & Piece, started producing. Their early bootlegs of Trinidad James and Zeds Dead caught the eyes and ears of a number of blogs and producers and soon after they produced their first official remix of Jaycen Amour’s track Stage Dive. It was released on Shabang Records and hit #47 in Beatport’s Top 100 Hip-Hop charts. They followed it up with their first original production Slut Scene which was released on American label Dirty Duck Records and hit #20 in Beatport’s Top 100 Hip-Hop charts, their next original track – produced with local T1R –Sonder continued the run and hit #24 in Beatport’s Top 100 Hip-Hop charts. In 2014 the duo toured the country, headlining a large number of parties, and played a succession of events in Australia at reputable venues including Chinese Laundry (supporting Doctor P and Hot Since 82 at two different parties). Their touring schedule and prolific shows caught the attention of national radio station George FM (the most listened to radio station for males 18-34 in New Zealand). The duo was offered the chance to co-host the Friday night 6-8pm ‘party’ slot, an opportunity they jumped at, and they now feature every week alongside the ever-popular Tim Phin.

The inroads on national radio resulted in high rotation of their remixes of Jetski Safari and Jupiter Project’s With You and The Leer’s Waste (which was named George FM’s Tune Of The Week on it’s release). In October they completed an official remix for Sony New Zealand of Maala’s Touch which was put into rotation on numerous stations around the country.

Their recently completed debut EP, The Love Goes EP, draws on their extensive networks and features a number of rising acts including Helen Corry who hit #1 on the NZ iTunes chart with Jetski Safari on their song Like A Lie, Diaz Grimm who’s debut album received four stars in the New Zealand Herald (NZ’s most read newspaper) and hit #5 on the NZ Official Album Charts, Lars Randa and many more.

With bookings in Fiji and the country’s biggest summer festivals coming up, as well as a nationwide tour early in 2016, Stack & Piece are showing no sign of slowing down – if anything, they’re speeding up.
BOOKINGS/MORE INFO
JAZ KAPOW / FENELLA STRATTON
E: jaz@twicethehype.co.nz  / fenella@twicethehype.co.nz
P: +64 21 128 7475 / +64 21 0540699 ​
Proudly powered by Weebly