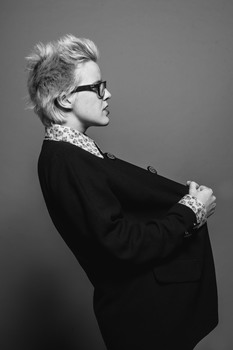 Randa is a young rapper from Auckland, New Zealand who began recording songs while living atop a Sydney laundromat in 2011.

In the Summer 2012, Randa’s raw and unorthodox live performances included enviable slots opening for Grimes and Crystal Castles. A music video for the bedroom produced ‘Frankenstein’ was released in 2013 which picked up a nomination for best new video at the NZVMAs that year. This was followed up at the 2014 NZVMAs with Randa talking home the Critic’s Choice Award, an award that recognises up-and-coming artists and potential future Tui recipients.

Randa featured on Dan Aux’s tracks ‘Kelly Bundy’ and ‘Rockstars’ and has also played at major events including The Big Day Out, Rhythm & Vines, Northern Bass, & Homegrown. Randa released their EP ‘Rangers' in 2014 which was produced by Josh Fountain (MAALA, Benee, Leisure) of Golden Age Studios. 2017 saw the release of 'Angel Boy' and 'Fashion' which has had nearly 300,000 plays on Spotify.

In 2019, Randa resurfaced with electric tracks like 'Toughen Up' & 'Rock Bottom'. Last year they released 'Heatwave' that was a musical and commercial success, garnering over 325,000 streams already.

Fast forward to 2021 and Randa is back on the scene with new music in the pipeline. Keep an eye out with more releases and captivating live performances from this forward thinking artist.