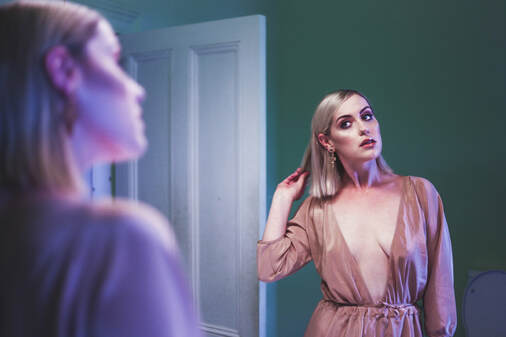 SOUNDCLOUD
Whether it’s a solo intimate set or with a full band in tow, Miloux has been constantly praised for her powerful vocals and her passion for experimentation within the live and recorded music sphere.

Miloux has spent the past three years honing her unique take on beat-driven, ambient electronica. Between spending her days teaching pre-teens to find their own voice and her nights performing around Auckland; Miloux is an incredible artist who mesmerizes everyone she performs to.

After years of musical training, Rebecca Melrose began performing as Miloux and running her pop sensibilities and jazz training through an electronic filter. The result is an unpredictable mix of an incredible voice and diverse and exciting instrumentation.

She has become a sought-after collaborator for Australasian producers, featuring on tracks from the likes of Chores, Benson, The Adults, Layla Kardan, Terace, and Yoko Zuna. This culmination of experience has gained her a strong following in the electronic realm.

2015 saw her represent New Zealand at the Shure Vocal Competition at the world-renowned Montreux Jazz Festival in Switzerland. In 2016, she released her debut video for ‘Pocket’, played the main stage at Chronophonium Festival and opened for a sold out show from Grammy nominated James Bay.

Her first release, EP 1, was produced by Ben Lawson and was recorded at Red Bull Studios Auckland. Her lead single, ‘Pocket’ was praised as a “pop-palatable track unafraid to test chord progressions and not stick to the basic scale train” (Sniffers) and has now racked up over 270,000 streams on Spotify. EP 1 was nominated for the Best Independent Debut award at the Taite Music Prize and was on the long list for the Silver Scroll Award.

EP2, was released in August 2017,  produced by Ben Lawson with Miloux at Red Bull Studios. From the dark and twisted drums of opening track ‘Holiday Inn’ to the etherial beauty of closing track ‘The Garden,’ EP2 is a sonically bold journey that solidifies Miloux as an artist to pay attention to.

​Miloux shared two tasteful tracks in 2018, the first being soulful 'Lay Down' before closing off the year with 'Down', another smooth number made with Haz Got Beats. Miloux was also busy earning  writing and producing credentials with Dubai based artist Layla Kardan on her debut album 'Saved' as well as working with Yoko-Zuna on their new track 'Yours'.

Come 2019, HazGotBeats and Miloux released their first single 'Enough' in June, a unique blend of soulful jazz and endearing electro. The talented duo have been hard at work at Red Bull's studio, and a full length collaborative EP is due in the latter half of 2019.