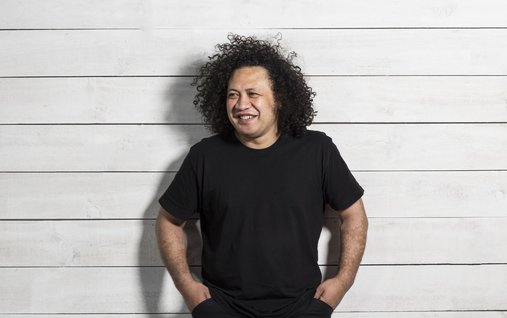 ​​Laughton Kora, with his incredible voice and immense talent has been at the forefront of New Zealand music for over the past decade.

Laughton has been playing music since the age of 6 appearing on stage as part of his father’s band until 17 years old when he won Smoke Free Rock Quest. His band Aunty Beatrice toured New Zealand and released a single.

He moved to Queenstown and formed Soul Charge with members KP (Sunshine Sound System) and P Digsss (Shapeshifter). In 2001 he headed
to Wellington and formed KORA (2003-2012) with his brothers.

​During the reign of KORA, Laughton also played in band The Heavy Metal Ninja’s with guitarist Richie Allen. HMN opened for both Shihad, Coheed and Cambria.

In 2013 Laughton forged ahead with his own solo project and has also formed duo Neon Ninja with Andy Keys (ex Op Shop). The summer of 2013/14 saw Laughton perform at BW Campgrounds, Rhythm & Vines NYE & Music at Matua Festival.

In 2014 Laughton was the lead in the TVNZ mini series "Coverband" followed closely by his critically acclaimed performance in the Auckland Theatre Company's "Jesus Christ Superstar" as Judas.

The start of 2015 saw Laughton producing songs and mentoring starting with Red Bull Studios Auckland & Team Dynamite for their song "Feet in the Firma" followed by his ongoing mentoring for NZ Music Commission across NZ. Laughton also joined forces with Shelton Woolright & Paul Matthews (I Am Giant) and formed Kenetic, releasing 'Living The Illusion' in January 2016 followed by 'Invincible' in April 2016, the later of which hit number 1 on the NZ Heat seekers chart. 2016 saw him in Live Theatres "Little Shop Of Horrors" taking him throughout NZ & UK/EU & was musical director of "Grease".

Laughton was busier than ever in 2017 performing solo, and with his band as Laughton Kora & Friends, he is aslo a member of NZ Marley All-Stars, Fly My Pretties & Kinetic. 2018 looks to be no different for Laughton, already completing a tour of Northland with Tiki Taane & Ria Hall and performing with the Auckland Philharmonia Orchestra in 'APO Does Disco.'

As Laughton is gets ready to release his much anticipated EP-expect to be taken on a journey of electronic funk with that will tantalise the ears, give you the overwhelming urge to party harder & leave you wanting more.