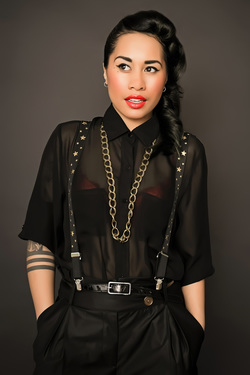 Named one of the thirteen top global divas by MTV Iggy (US), Iva Lamkum has enjoyed critical support here and abroad, including a placement on influential music blog RCRD LBL. Along the way she’s received nominations for not only the prestigious APRA Silver Scroll, but also the Vodafone NZ Music Awards, and chalked up considerable rotate time on radio playlists across the country.
​
Her critically acclaimed debut album Black Eagle, with its elements of roots reggae, folk, rock, funk, indie and beyond, saw Iva touring internationally and wowing audiences at festivals like Ulsan and Jarocin Festivals in Korea, Formula One in Singapore, Glastonbury in England , Riddu Riddu in Norway and Sziget in Hungary.

The last couple of years has seen Iva collaborate with a variety of artists including Isaac Aesili, Oakley Grenell and The Sweetmix Kids. Iva has been working on new music and is about to release a song co-written and co-produced by Josh Fountain (2019 VNZMA’s producer of the year), Diaz Grimm & James Newman (John Newman, Rudimental, Ed Sheeran & Calvin Harris). Watch this space as 2020 shapes up to be Iva Lankum's year.